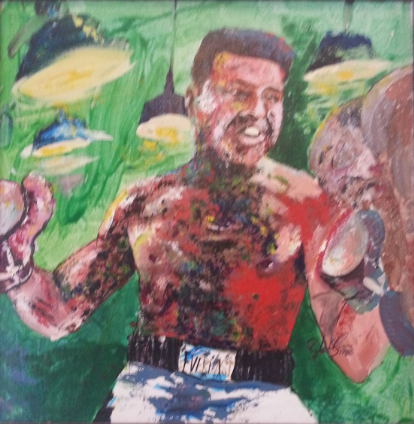 Muhammad Ali has passed. While saddened, I wasn’t shocked. Certainly I knew that this day would come. As a matter of fact, a friend made a Facebook post asking, “Did you think he would live forever?” As I thought what to make of that question, I realized that in some sense, the Champ had passed several years ago. As he slipped peacefully into his own head, stricken with Parkinson’s syndrome, he was allowed to become almost God-like in my eyes…always present, but silent, a beacon of peace and power.

In a way, I was glad that this disease left him frozen in time as a symbol to so many. I have no doubt that his light would have been strong enough to bring rationality to many of our chaotic problems of today. Whether in Ferguson, the Middle East, our own political arena, I know in my heart that the Champ would have been a voice of sense, strength, and leadership. And he would have been most important, an example.

But I also am aware of the deteriorating level of discourse in our world, particularly in the news media and across social media. Even a giant like the Champ may have been toppled by this self-indulgent monster. It eats up and spits out the imperfect, but is particularly insatiable while stalking the best of us. I’m quite content never having a chance to witness it with the Champ.

Imagine having the opportunity not only to go into a kind of stasis, but to do so as the best ever version of yourself. This poorly educated boy from Louisville rapidly rose through the triviality of sports, particularly the brutal sport of boxing, to become possibly the most recognizable person on the planet. He was also one of the most despised. Overtly polarizing, he used his fame to demonstrate to the world that a man raised in violence could put peace first. Eventually he became one of the most respected and loved.

When I watched the documentary When We Were Kings, about the George Foreman fight in Zaire, I watched as the Champ walked to the cockpit of the plane and showed the world the black pilots. It was so simple…black people can do anything. It was more powerful than any protest or any slogan. I immediately shared it with my children. I wished I could share it with all children. It was more powerful than any of the extremist noise we hear today from all sides.

I had the pleasure of meeting the Champ sometime in the late 1980s. He was signing autographs at a show somewhere in New York. I dragged my wife and two-year-old daughter Lilly along. I had been to many autograph signings with many great athletes, but this was different. The Champ transcended sports. Throughout the line snaking around the room, grown men were in awe. Everyone brought their kids and was sharing tales of their best memories relating to the Champ. As impressed as I was to meet Ted Williams, at no point would I ever want to hug him. Every person in the place would have happily traded their autograph for a hug from the Champ.

The loss of a true hero in a world with so few heroes is truly a sad day. Where will our kids learn that even the strongest fighter shows ten times his strength by not fighting? How does one teach that strength of character is more powerful than the strength of fists or guns? I only know that it is up to me and people like me to carry on this ideal.

© Robert O’Connell and http://www.thesmartestguyiknow.wordpress.com, 2011-2016. Unauthorized use and/or duplication of this material without express and written permission from this site’s author and/or owner is strictly prohibited. Excerpts and links may be used, provided that full and clear credit is given to Robert O’Connell and http://www.thesmartestguyiknow.wordpress.com with appropriate and specific direction to the original content.

4 thoughts on “Farewell to the King of the World”