I recently went to a consignment shop in Durham with my wife. I saw that they had a large stack of Durham Sun newspapers from the early 1960’s. They were ten cents apiece. I looked through them and picked out about sixty cents worth, figuring that it might be interesting to see what was going on in The Triangle when I was five or six years old and living in New Jersey. I must admit that I found the exercise to be quite illuminating and have decided to share some of my findings. I tried to break the stories up in some sensible groupings.

The earliest of the papers I read were from November 23rd and 24th, 1963, which were the two days following the assassination of President John F. Kennedy. I’ve seen dozens

of banner headlines reporting the death and Mourning of JFK, but these provided more insight into the case against Lee Harvey Oswald.

Ironically, the article in the Sunday paper outlining the case against Oswald was read by many people after Oswald had already been shot and killed by Jack Ruby at 11:21AM Dallas time.

There was a story about J.D. Tippitt, the police officer shot and killed by Oswald fleeing the Book Depository. Check out the salary and benefits bestowed on a 39-year old cop in a major city with a wife and three kids. Sheesh! 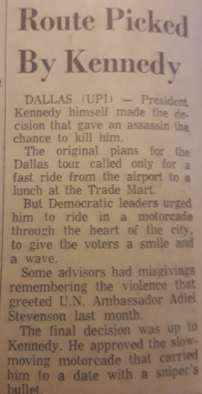 This last one surprised me. Kennedy actually did not pick the route, but did approve it. Sensationalized journalism has obviously been around for a while.

Lyndon Baines Johnson became President quite unexpectedly, but quickly faced the same crap that they do today.

Here is crap from Fidel Castro, crap about Viet Nam,

and crap from future opponent for the Presidency, Barry

Goldwater, who suggested that Johnson would lead us to atomic warfare. Who’d have thought that a Republican would resort to hyperbolic threats to scare voters into choosing him?

Ooh, look! Studebaker is closing its U.S. manufacturing operations. Thank goodness that the auto industry is so strong in 2020.

Takeaways from today’s Alley Oop… 1.) Mrs. Oop has is pretty sexy in that above-the-knee, strapless loincloth. 2.) She appears to be telling Oop that she is with child. 3.) Oop does not seem happy. 4.) Roe v. Wade is still 20,000 years in the future. In tomorrow’s episode…The Oops go to see the Witch Doctor!!!

Progress, YES! Political correctness, NOT YET!

I see two National Championships in your future. 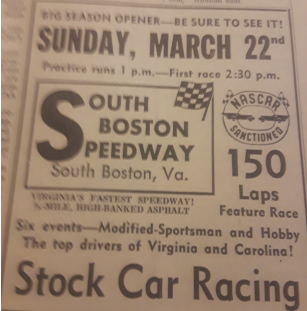 I have a feeling that this sport will become big someday.

Loudmouth Cassius Clay claims to want to fight Liston. Nonsense, he’d be killed. He ain’t all that. 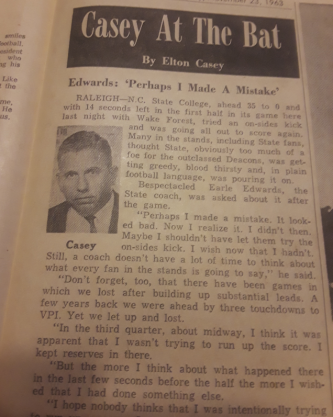 An on-sides kick with 14 seconds left in the first half leading 35-0…and “Perhaps” you made a mistake? You abso-fucking-lutely made a mistake!

You’re wrong, Frank McGuire. Notice that UCLA is undefeated. I’ll bet they win this one and nine more out of the next eleven! 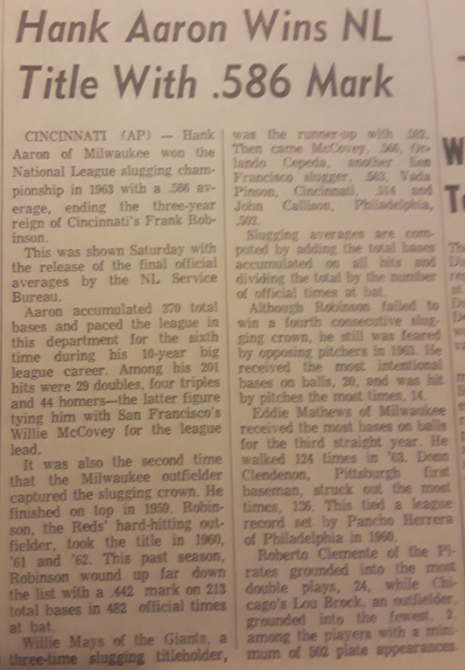 Hank Aaron leads the league in Slugging Average. I found this odd as for the first half of my life, offensive baseball stats were all about the big three, Home Runs, RBIs and Batting Average. Only recently have Batting Average and RBIs been discredited as being poor measures of offensive performance. Slugging average along with On Base Percentage are much more valued today. The list of leaders includes future Hall-of-Famers Aaron, McCovey, Mays, Matthews, Cepeda and Frank Robinson. Robinson had led the league the previous three years for the Reds who somehow decided to trade him three seasons hence to the Orioles for good-but-not-great pitcher, Milt Pappas. Frank Robinson won a Triple Crown in his first season with the Orioles.

Dick “Night Train” Lane, missing a game? That’s rare. He was one of the toughest players

to ever grace a football field and was on the NFL’s 75th year All-Time Team. Wait, he’s missing the game due to the death of his wife? She must have been pretty young. Wait, he was married to Dinah Washington…the jazz singer, the best-selling black artist of the 50’s, the Queen of the Blues? How had I never heard of this? I know I was only five, but I have been immersed in both football and jazz for my entire life. He was her seventh (and obviously final) husband. She died in her sleep from an accidental drug overdose of barbiturates. It made me think of other pairings of great athletes and performers. Were they the best? David Beckham and that Spice Girl? Nah, Dinah was much bigger. Brady and Bundchen? A model? Pass. Dwyane Wade and Gabrielle Union? C’mon, she hosts a reality show. Russell Wilson and Ciara? I’ll still take Dinah. J-Lo and A-Rod? Maybe, but they ain’t married yet.

Ooh, a space telescope! Wait, the Hubble telescope won’t be launched for 27 more years. Oh, this telescope fell to earth after the balloons lifting it into space broke free. Yes, a 30-foot-high telescope costing 2.5 million dollars (in 1963 money), was lifted into space using tandem six-story high balloons to lift it high enough to get a better look at Jupiter. What could go wrong?

This inexpensive advancement in the crotch-related sciences would lead to generations of yeast infections and the subsequent development of Monistat and Vagisil.

Cape Canaveral is keeping busy with two launches in one day. Sadly, it will be renamed Cape Kennedy in a matter of

days. In a side note, Aldous Huxley passed away. Besides being a great author, he was also a pacifist and humanist. If only he were alive today to see the amazing progress we have made in these two areas of…oh, wait…never mind…

90 days…for what, you ask? Protesting segregati

on. Yes, two PhD Professors, molders of young minds, jailed for three months for a peaceful protest. Today, rapists who just attend college serve less time. I wonder what murderers got back then…

Nothing! This guy was acquitted of murdering his wife…not just his first wife, either. He already got away killing the first one! Oh, wait…apparently, they were only women. Thankfully, women have achieved full equality in 2020, right?

This is bad…really bad. All of this was during my lifetime. I grew up in a Puerto Rican enclave in a black neighborhood of a very mixed town in New Jersey. This just wasn’t a thing in my life. This want ad was a regular thing in the God-damned newspaper!

This headline seems to have a modicum of progressiveness, but why, Mr. Newspaper Man, are the quotes around the word ‘dissatisfied’? Is this some subtle message that negroes are malingerers or that they have no business being dissatisfied and should be happy to have low-paying jobs? In other words, WTF?

Remember the Duke vs. UCLA in the NCAA final thing from earlier? They got there by beating Michigan in the Semi-final game. This was on the front page. The praise of the Wolverines two star players, Cazzie Russell and Bill Buntin was effusive. “These two great Negro stars were unable to turn the tide against well-prepared and smartly coached Duke.” Thankfully, today, basketball stars are no longer called Negros, but well-prepared and smartly coached are sadly, still code words for “White”. 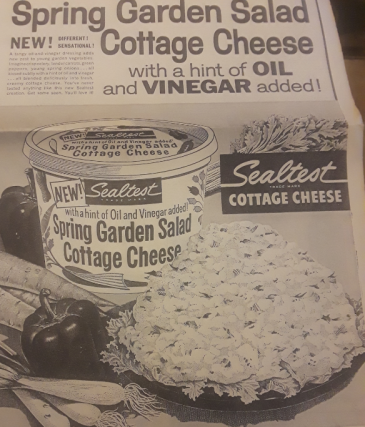 Does anyone eat cottage cheese anymore? Not only does this sound disgusting, the grayscale newsprint photo makes it look even less appealing.

Here are some food prices of the day… 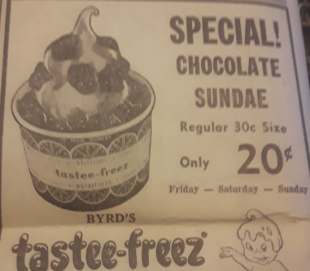 Free turkey with a car! 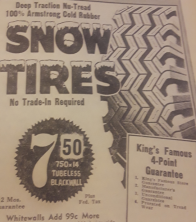 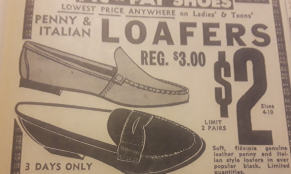 I just reviewed this play a few months ago.

It is based on the “Scopes Monkey Trial” about a teacher who was prosecuted for teaching evolution in the classroom. The trial took place in 1925, the play written in 1955, became a movie in 1960, was relevant enough to be performed here in 1964, and sadly, is still relevant today.

I have no explanation for these. 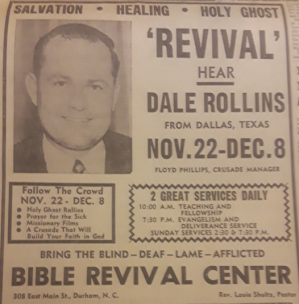 The churches, schools and the local bank were all behind this. We beat polio. What, the Hell is wrong with the anti-vaxers?

Surprisingly, none of the vintage versions of these games would be worth much more than fifteen bucks today. This dude, 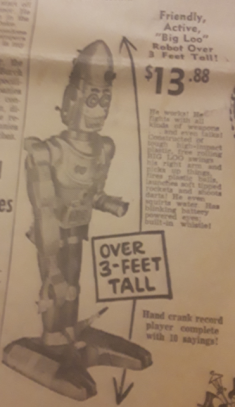 however, could go for over a grand today. Nice profit from a $13.88 investment. 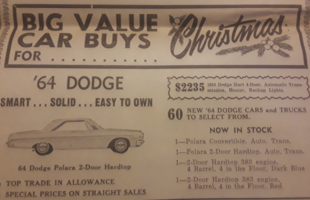 I actually have this one.

Here are some other gift ideas… 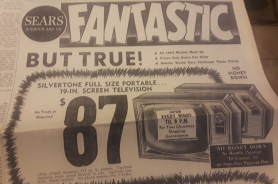 6 thoughts on “A Window into the Past”