I recently was flipping through the channels and came across the movie, Rocky. This is one of those films that I always watch when I run across it. I typically catch the end which is an amazing extended fight scene, but this time, I caught it earlier.  This was the scene on Thanksgiving where Rocky and Adrian have a somewhat awkward first date. It was this type of scene about the everyday lives of some lower-class people in Philadelphia that turned this film from a B-level boxing movie to an A-level Best Picture winner.

I first saw Rocky in the theater in the winter of late 1976, during my senior year of high school. I remember at the time being quite moved by Rocky and Adrian’s first kiss. For the young readers out there, who think that motion pictures started with Star Wars – The Phantom Menace, or that any Batman, prior to Christian Bale belongs on Turner Classic Movies, allow me to provide a bit of context.

Rocky is a somewhat punch-drunk loser and small-time boxer who unexpectedly gets a championship fight. Adrian is an extremely shy and mousy woman who works in a pet shop and lives with and takes care of her brutish, alcoholic, meat packing brother. On Thanksgiving, Rocky takes Adrian for a short ice skate. Afterwards, they take a walk through the quiet streets of Philly, ending up at Rocky’s small and shabby apartment.

While the scene as I remembered it was deeply romantic, this time around, in a culturally different time, I noticed that I looked at it quite differently. This scene could quite appropriately be used today as part of a sexual harassment seminar. Let’s look a bit closer, shall we?

First, Rocky tries to get Adrian up to his apartment. She clearly declines at least

three times and appears quite uncomfortable. I assume the young me felt she was playing “hard to get”, like Doris Day or Kitty Genovese (look it up, kids). He eventually cons her into coming up claiming that he needs to use the bathroom (a lie).

Once in the apartment, Adrian keeps on her hat and coat. 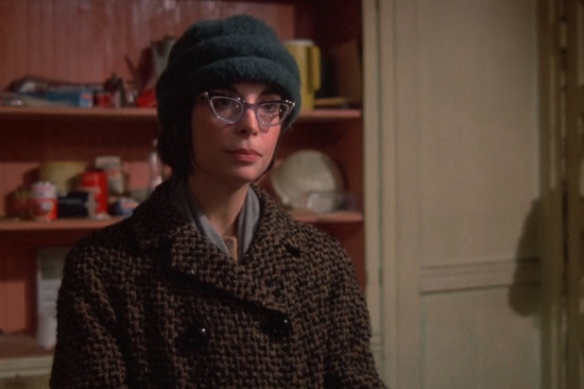 Rocky takes off his shirt wearing an undershirt commonly referred to as a “wife-beater”.

This is probably an homage to Marlin Brando’s Stanley Kowalski from A Streetcar Named Desire. This film was made in 1948 when rape and sexual assault were even more popular than in 1976.

Adrian specifically says “I gotta go”, but Rocky asks why.

When she says she’d like to call her brother, Rocky says that he will call. He opens a window and shouts to a facing wall that Adrian is safe with him.

Rocky moves closer to Adrian and grabs a chin-up bar, flexing his muscles to either arouse or intimidate.

Even though Adrian is still wearing a long winter coat, you can guess that she is maybe 110 pounds soaking wet. Rocky is a heavyweight boxer.

Adrian moves toward the door and Rocky clearly and overtly blocks her path.

By now, Sandra Bullock or Reese Witherspoon would have driven a knee into Rocky’s balls.

While blocking the door, Rocky moves in even closer. He removes Adrian’s glasses without permission and then her hat.

He moves in closely and utters the famous line, “I wanna kiss ya. You don’t have to kiss me back if ya don’t want. I wanna kiss you.” 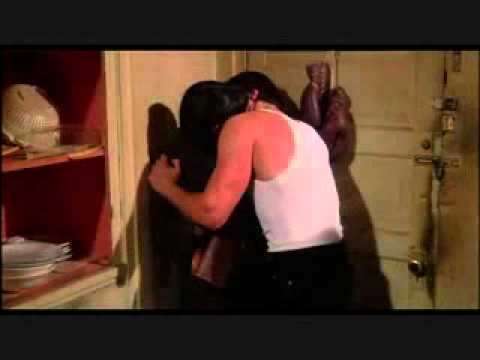 I’ve got to tell you that in a post-Harvey Weinstein 2018, the line had a pretty rapey vibe. Of course we all know that Rocky and Adrian eventually got married, had at least one kid and four sequels before her character was mercifully killed off (ovarian Cancer) between Rocky V and Rocky Balboa. It really made me wonder how many other pop culture moments from my youth would be looked at differently today.

More importantly, It made me wonder about raising a son today. My son is already married and by all appearances has a healthy relationship with his wife based on respect and equality. I’m also sure that if he tried to club her and drag her to his cave by her hair, she would take his club and shove it up his Neanderthal nether regions.

Doing some quick reflection, I estimated that roughly seventy percent of anything I say to my wife would be considered sexual harassment in the workplace. I have a friend who recently went through Sexual Harassment Training…Yes, it was Tyrone, but this was not court ordered. Everyone at his firm took the course. He learned that the term “unwanted” was critical. His interpretation was that this gave him license to ask each person out once, or until he received a definitive “no”. I asked him if this would be true if his company had say, 500 female employees.

He didn’t see how the volume mattered as long as he took no more than one bite from each apple. I then asked him if he thought it would be within the rules to send a blast email, propositioning all 500 of the ladies simultaneously. I’m still waiting for him to get back to me on that.

I’m not sure what the future holds and I am as happy as one can be that I have been blessed with a great wife and a happy marriage. I am a bit concerned about teaching young people amid these changing tides. I supposed the best strategy is to lead by example. I hope I can set a high bar for my behavior or at least stay in the middle of the pack. As Tyrone says, “I may not be Ward Cleaver, but I’m no Ike Turner, either.”

© Robert O’Connell and http://www.thesmartestguyiknow.wordpress.com, 2011-2018. Unauthorized use and/or duplication of this material without express and written permission from this site’s author and/or owner is strictly prohibited. Excerpts and links may be used, provided that full and clear credit is given to Robert O’Connell and http://www.thesmartestguyiknow.wordpress.com with appropriate and specific direction to the original content.