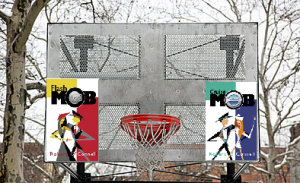 I was driving in town recently and passed by one of the public basketball courts. Actually, this was a set of four courts and several were occupied by pick-up games. Since pick-up ball is typically half court, there were probably about six games going on, with the last two halves filled with younger kids shooting around. This tableau brought back a flood of memories for me.

When I was a kid, I had no conception of street ball, the colloquial term for pick-up basketball in urban areas. I played primarily with my brother, Tim. While he was only a year older than me, he was always seven inches taller. As you can probably guess, this made it extremely difficult to get shots off. Oh, I had a couple of moves, but having no left hand made me pretty easy to defend. I did develop a pretty good hook shot, but was later to find that this was only used by awful white kids and Kareem Abdul-Jabbar. I was, however, able to learn a valuable lesson on defense while playing Tim. Like many of the bigger white kids, Tim’s major offensive asset was his ass. He would back into the lane, pushing everyone out of the way, and then turn around and shoot a three footer.

My education into the game came quite late. I didn’t really understand basketball, at least as a player, until college. I started hanging out with a group of black fellows who kindly invited me to their trips to the court. Instantly, I exposed myself to be a rube at the game, but many of them took me on as a project and started showing me what to do and not to do. I also worked on my upper body strength so I would be releasing the ball from a higher point. I was pleasantly surprised to find that I was able to develop a decent shot.

Two things were critical in my development. I wanted to learn and I was madly competitive when it came to sports. I want to tread lightly here as I have a daughter who is a sociologist and she is constantly throwing gender issues in my face. Even though I feel that I am one of the “good guys” as a reasonably gender neutral dad, she slaps most of my arguments away like Tim did to my attempts at youthful jump shots.

I just love the connection you get with sports, and street ball provides the most and best opportunities for it. Here are some of the best aspects of the game:

I got next – That’s the phrase used to take on the team on the court who wins the current game. The rush comes when that game ends and you and your boys slowly strut onto the court. Our chests are out and we are looking for eye contact with the guy on the other team that we are going to stick. That’s right, I can stick him. That motherf****r can’t stick me. Men rarely feel so strong.

The finger point – When you set up a teammate’s bucket with a great pass, it is customary for the scorer to make eye contact with you while you are both running back up the court for defense. Patrick Ewing was very good about doing this. There are few greater feelings of affirmation. Receiving the point is even better than giving the point. Where else does this action have meaning? If you see someone doing this at the office, they are full of shit. Save the weak high-five for the workplace.

Great plays – True story. I was playing a full-court game at a park in New Brunswick, New Jersey. I was already a college professor and was playing with students. I’m playing defense at the foul line and my guy is at the top of the key, just out of normal shooting range. One of his teammates is lagging back at the other foul line taking a breather. My guy chucks it up from three-point range and follows his shot. The shot hits the back of the iron and rockets over all of our heads toward mid-court. I take off after it as the guy lagging back comes running toward it. Right at the mid-court circle, we both reach for the bouncing ball while racing toward one another. I get a piece first and shove the ball forward. The ball bounces right between the other guy’s legs as I run past him. I pick up the bounce and finger roll a lay-up over the front of the rim without breaking stride. Since it was full court, everyone else there was watching and the crowd went nuts. This was my best play ever and it was all a series of random accidents.

Knowing ya’ boy’s game – Obviously, it is common to play with friends. The better you know their game, the better you can perform. My best friend Dwight is a poor shooter. This shouldn’t be a liability in street ball, but I know that he is rarely going to put the ball up. Therefore, I don’t waste effort trying to set him up or setting picks for him, rather I work to get open. Also, Dwight plays the most smothering defense that I’ve ever seen. In the handful of times we were on opposing teams and he stuck me, it was like I was out for a jog. I NEVER touched the ball.

Knowing your own game – I was competent at a lot of stuff, but great at none. Still, one skill I retained from playing my brother was the ability to defend a big man. I used my body to keep them out of the paint and had good anticipation for reach around steals. I also had a good feel for attacking the ball before they got it over their head to shoot.

It is not all roses, however, particularly the aroma. There are also quite a few pretty annoying things about street ball.

The ref – There are no referees in street ball and everyone is typically on the same page regarding foul calls…they don’t exist. If you are fouled, the protocol is to utter the word “ball”. This results in your team retaining possession. I don’t recall EVER using the term. In street ball, you are occasionally fouled. Your message should be delivered through eye contact and should infer the following: “I’m not calling that but I will remember it next time you try to bring your sorry-ass shit down the lane on me.”

The prima donna – This is the exception to the previous rule. There’s occasionally one asshole who calls “ball” every time he misses a shot…every time. You can typically pick him out in advance. He has the most expensive sneakers and the most meticulous afro. His outfit may even match. Make your fouls count on this guy.

Not-so-great plays – A guy dunked on me once…not over me, but ON me. Again, I was playing with students. I’m taking the ball out and this kid defending the inbound keeps slapping the ball out of my hands while I’m still out of bounds. Twice was enough for me. On the third attempt, I held the ball over my head and drove it like a soccer throw-in right into his chest. After a brief scrum where we were pulled apart, the game continued. On their next trip down the court, the guy drives the lane and goes up while stepping on my hip to dunk on me. I was the butt of many oohs and ahs.

Trash talkers – Some guys feel the need to run their mouth. I’m not a practitioner nor do I mind much, especially when it’s funny stuff. The worst are the braggarts. I played with this guy once. We were shooting around and he mentions that he played in a park in Paterson, New Jersey. Nobody asked him, so you knew he was a yakker. He said Rory Sparrow was there and played in their game. Rory Sparrow was a star at Eastside High and later at Villanova for Rollie Massimino. He later played a dozen years in the NBA. Most people are aware that NBA quality players a much better than the average street baller, but few are aware of how much better they are. This would have been between Rory’s junior and senior year at Villanova. I get sucked in and ask the guy what it was like playing with an individual of Rory Sparrow’s caliber. The guy’s response was, “Man, I be doggin’ Rory Sparrow!” Shut up, asshole!

I guess I just miss it all. As I get older, I find less and less that compares with the experience. We felt alive and fit and, well, manly. I miss it a lot.

© Copyright 2015 – Robert O’Connell. Unauthorized use and/or duplication of this material without express and written permission from this site’s author and/or owner is strictly prohibited. Excerpts and links may be used, provided that full and clear credit is given to Robert O’Connell with appropriate and specific direction to the original content.

3 thoughts on “I Be Doggin’ Rory Sparrow”